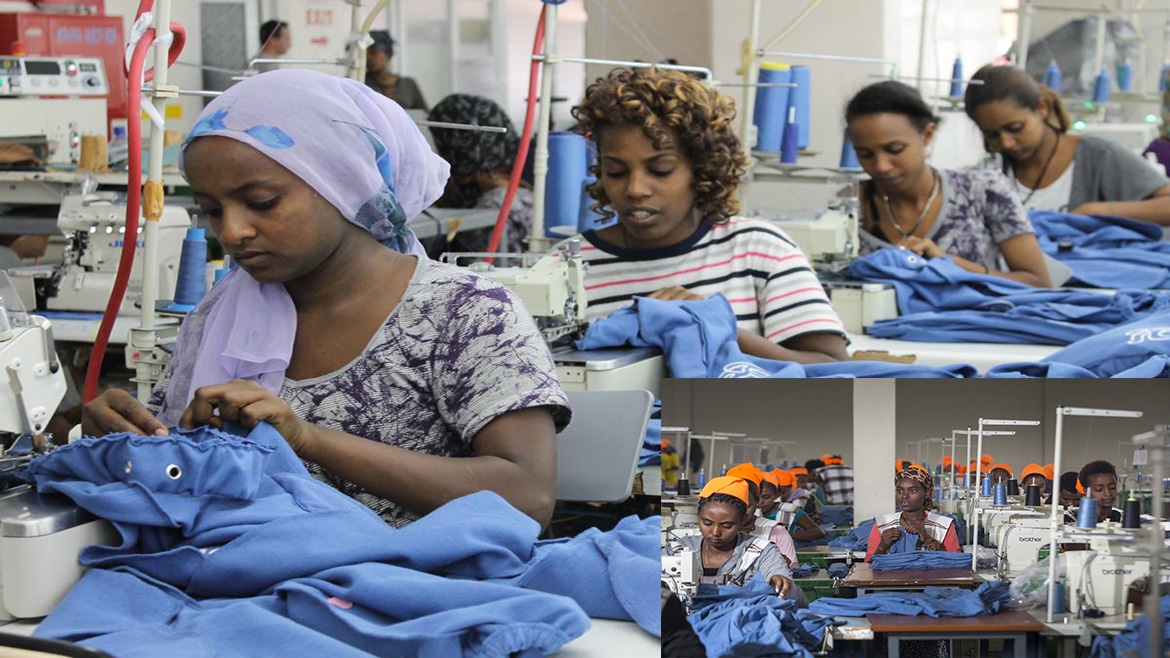 Ethiopia plans to export more than a billion dollars’ worth of textile products this year as part of its second five-year Growth and Transformation Plan, according to textile industry executives. The plan ends in 2020.

The nation’s garment and textile industry witnessed a growing demand worldwide due to the working age population size. Similarly, the government continues with its effort to make the country the textile and garment hub of Africa throughout its first and second five-year plans. The plan reportedly registered a double digit economic growth; and government forecasts the growth to continue at an 11 percent rate annually with textile industry taking the leading role.

Textile and apparel are among the priority subsectors identified by the government in transforming the country’s traditional agriculture-based economy to an industrialized one.

Industry planners believe the nation has the potential of becoming one of the leading apparel producers in Africa. To this end, the government has launched an incentive program to attract foreign and local investors in the field with privileges like tax -free imports of industrial goods, favourable bank loans, income tax breaks, and provisions of production facilities in the nation’s industrial parks located around the country. Another opportunity open to investors in the apparel and textile industry is the duty-free access to US markets for Ethiopian exports through the African Growth and Opportunity Act (AGOA).

In recent years, the global market has become increasingly accessible to countries such as Ethiopia. New export opportunities were created through incentives such as AGOA and the Common Market of Eastern and Southern Africa (COMESA) and the many bilateral trade agreements made with western countries, including the Netherlands, Belgium, and Luxemburg. Ethiopia is also part of the “Everything But Arms”  program that has been set up to provide access to the EU  market for Lesser Developed Beneficiary Countries, free of duty and without quota restrictions for all export products except firearms.

“Ethiopia is a very good destination for the garment industry,” Sajith Kumar, an investor from India in textile and garment subsector, said.

The government is providing investors with attractive incentives. Availability of labour is there, but skilled manpower is not available and it needs to be created, Kumar told The Reporter.

As the industry demands a large pool of skilled manpower and migrant labourers, officials encourage garment and textile firms to consider investing in Agricultural technology, cotton plantations, production and processing plants, marketing and designing firms, among others.

The government is also placing special emphasis on the industry to meet the growing worldwide demand for Ethiopian textiles products, an executive running a major textile plant in the country told The Reporter.

“We do not have to look for buyers”, said Kibrom Kiros, an executive at the Mekele-based MAA Garment and Textile firm, after attending an international trade fair held here in the capital early this month.

There is a huge market for Ethiopian garment and textile products, Kibrom, whose firm boasts of producing more than 20,000 pieces of apparel per day and providing jobs for more than 2,000 workers, said. His firm, which is one of the largest garment and textile industries in the northern region of Tigray, aims to double production and its labour force by the end of this five-year Growth and Transformation Plan. It plans to stop providing its fabric to other manufacturers to meet its own production demand, he said.

“We need more cotton and boost production in a timely manner” he said, raising concerns of cotton shortages among the challenges facing the industry. There are too many factories with limited raw materials that hold back their productivity, he said.

Kibrom cites the case of H&M, a Swedish multinational clothing-retail company, demanding a lot more textile products than the nation can offer.

Sajith Kumar of Industrial, Equipment, Maintenance and Parts Supplier (IIGM) said he secured land from the government to service his Indian clients that have expanded their operation in Ethiopia. In partnership with GREENSPAN Ethiopia, an agricultural technology company, the pair is set to provide garment and textile solutions to firms operating in the country. Their services include trainings of operators, mechanics, and engineers.

“We understand the gap in skilled manpower. We will start service in the next 90 days and hope to pioneer in lessening the gap,” Kumar whose firm, IIGM, operates in India, Bangladesh, and Jordan and now Ethiopia, said.

The industry has grown an average of 51 per cent over the last 5-6 years and some 65 international textile investment projects have been licensed for foreign investors. Retailers like H&M, Primark, and Tesco have established office in 2012 and are buying apparels from manufacturers in Ethiopia.

According to the Central Statistical Authority’s report, during the first three years of the GTP implementation, a total of 4.9 billion birr foreign exchange earnings were obtained from the textile and garment industries. The market was obtained by accessing the domestic market, which was 33 percent, Northern America, the potential export destination to textile products, followed by Middle East and Western Europe, Asia and Africa, Central and Latin America, Australia and New Zealand.

Notwithstanding the efforts made so far, the industry has challenges. The skilled labour market is not yet developed. Thus, this significant manufacturing input is not available

When it comes to mitigating high turnover of employees that challenges most industry owners, Kibrom believes that primarily, management in the sector need to acknowledge the external social environment they do business in. Kibrom says, “If management recognizes the external social environment it operates in, it will be easier to establish organizational culture, which is usually a rare case to obtain, as mostly it requests careful planning and execution to muddle up the organizational culture within which the organization is operating.”

He added says, “To bring such culture the organization needs to provide job security for employees, fulfil basic needs on areas like health insurance, guaranteed day-offs and avail promotional scheme for employees. Employees also need to be trained on technical and managerial skills. Such types of activities minimize the turnover of employees.”

In addition, researchers on the sector believe that developing such market requires time. For instance, breaking the circle of the low wage leading to low productivity is challenging. Due to this, hardworking labourens do not have other choice but to migrate to other sectors due to the difficulty to satisfy daily living.

Moreover, to basically transform the manufacturing sector that competes in the international market, creating a mass of disciplined and skilled industrial labour force, innovation or adoption of best technologies, marketing networks, best organizational practice and structures are fundamental.

People like Kumar, who has long years of experience on the industry have also another concern when it comes to clearing spare- parts at the Customs.  He said, “sometimes it takes two to three weeks to clear spare parts or sometimes as equipment as needle that can be easily identified, at the Customs.”

He provides machineries and spare-parts and understands the challenges his customer’s face, whose production is hampered due to delay of parts. But Kumar did not hold back what he thought might be solution. “The Government either needs to have good policy or employees at the customs need to be trained on such matters,” he said.

With the government fully supporting the garment and textile industry, there are still some glitches that need to be met, industry actors say.

This website uses cookies to improve your experience. We'll assume you're ok with this, but you can opt-out if you wish. Accept Read More